18 Reasons For Rejection of Your IOS App 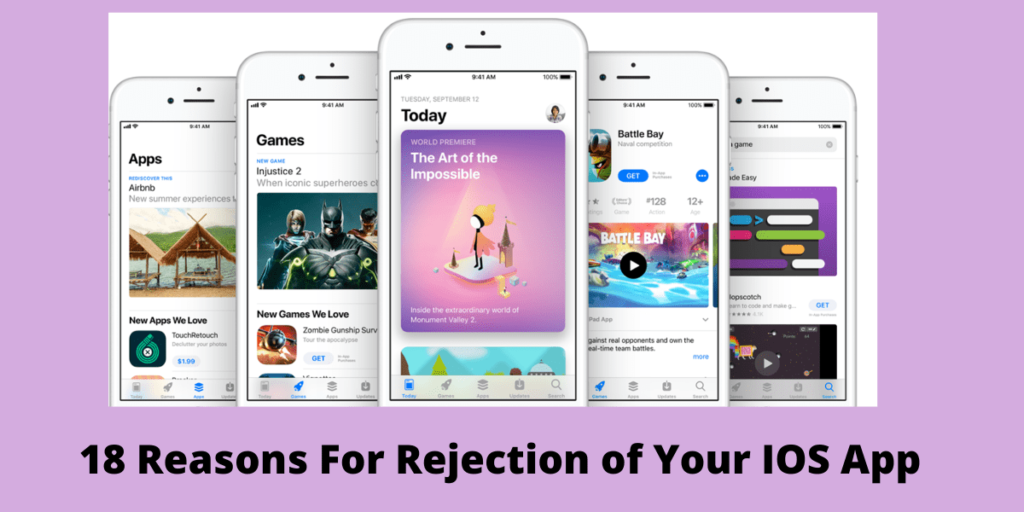 With more than 2 million apps on the iOS App Store, launching your app in the highly competitive market is not an easy task. Every day, thousands of apps are being submitted by developers from all around the world.

iPhone App Development consumes a lot of time and effort. You have to be familiar with the Apple App Store guidelines and develop an app based on that.

Even though you followed the app store guidelines and developed the best app as per the current market scenario, then also there are chances that your app gets rejected by Apple.

You might be wondering what is the possible reason behind the rejection? There are several common mistakes that lead to the app’s rejection.

To make your task easy, here we will provide a list of all the reasons due to which your app might have got rejected. By understanding these points and taking action on it, you will be able to publish your app in the App Store easily.

So, without waiting much, let’s get started:

18 Reasons For Rejection of Your IOS App

Apple never tolerates an app that contains any kind of crashes or bugs. During the testing phase, App store regulators might have found unstable performance and bugs. Check out all the crashes and bugs thoroughly on different devices during the testing phase and then resubmit the app again.

Apple not only wants your app to look beautiful and trustworthy; but also want that it provides a seamless performance. The reasons behind poor performance include first screen confusion, rough navigation, page loading issues, etc. Therefore, optimize your app as much as you can and then submit the app.

Broken Links is one of the most essential reasons due to which the majority of apps are rejected on the App Store. Your app might also get rejected due to this. Therefore, before submitting your app again, check that links are working properly on every page. For this, you can take help from any tool available in the market.

Your app might have got rejected due to bad UI. Next time, during the iPhone App Development & Designing phase, make sure that you follow Apple’s Design Guidelines. By keeping this in mind, you will have a clear idea about how to design the UI of the app to get the best results.

Around 4% of apps are rejected by Apple due to irrelevant content. Your app might also have rejected due to this reason. To approve your app ensures that all the details such as names, descriptions, screenshots, or previews & functionality should be mentioned as per the Apple Developer Guidelines.

If you have used Private API, your app has got rejected. Apple offers the public as well as private APIs, but developers are bound to use only the public APIs. Private APIs are only used by Apple to prevent abusing the user data.

This is yet another reason, your app got rejected by Apple. Based on keywords, users will be to find your app. Therefore, next time don’t insert irrelevant keywords that don’t represent your application. It is not allowed to use trademarked words or titles that are confusing.

Inaccurate app description, metadata, screenshots, and preview might also be a reason behind your app’s rejection. Any kind of incorrect information leads to App Store rejection. Only mention genuine and required information in the description.

If your app is not unique or redundant, then it might have got rejected. Apple doesn’t like to waste users and reviewers’ time in this kind of apps. Developing a unique app is the surefire way to app store approval.

If you haven’t integrated the proper payment system in the app, your app has got rejected.

If your app asks for money to offer specific functionality or provide users specific content offline, then transactions should occur from Apple’s built-in purchasing system. This makes sure that the amount is passed through Apple’s marketplace.

The next reason your app is rejected by Apple is due to a lack of information. Around 16% of apps are rejected due to this reason. To resolve this, you should provide complete details of all the things listed below:

Your app might have rejected because it contains offensive language. Apple doesn’t want any kind of comments about religious faiths, ages, orientations, etc. Anything that provokes anger or violent notion among users leads to app store rejection.

Your app may have got rejected because it doesn’t contain proper metadata. Metadata shouldn’t point towards any other platform. It should be precise. Also, keep in mind that the content and the functionality of the app should be in synchronization with each other.

This is one important factor due to which your app might get rejected. If your app contains the same type of app that is present in the app store, it will get rejected. Please note that your icon should represent the services that you provide to the users.

If you have given improper naming of the app, your app might have got rejected. Therefore, after iPhone App Development, when you are going to submit the application, make sure that the app name mentioned on the app store should remain the same when it gets installed on the user’s device.

If your app a complicated UX, then it may have got rejected. Therefore you should review various things such as navigation, customer journey via design and all the features and functionalities that you have included in the app. Also, make sure that the app follows standard iOS design specifications.

Your app may have got rejected if it is using an iOS advertising identifier (IDFA) without any ad functionality.

So, these were some of the most important reasons for the rejection of your iOS App. Therefore, we suggest you look after all the reasons mentioned here and then resubmit your app in the App Store.